Book Review: The Very Worst Missionary: A Memoir or Whatever 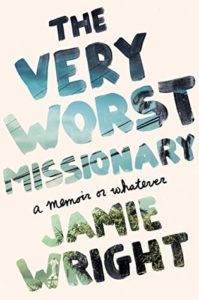 Confession: I am currently in the middle of reading 6 books. It was 7 until I finished one today. However, it was at 7 for less than 24 hours; I picked up and finished this book almost immediately, which is seriously saying something for someone with 2 kids.

I’ve followed Jamie the Very Worst Missionary for a long time on facebook, and I’ve always enjoyed her sense of humor and blunt honesty, so I was really excited for her memoir (or whatever) to come out. I was not at all disappointed.

The book reads quite easily; the stories are engaging, but move along, leaving you wanting more. In fact, the biggest problem was that it felt like chatting with a friend over coffee, but I couldn’t ask follow-up questions. I could easily have read hundreds of more pages. I felt like the memoir was chalk-full of fun tales, but it also didn’t run as a best-of reel like many movie trailers. Instead, it felt like it just barely scratched the surface of Jamie’s story, and there’s a whole lot more she could say about any one of the several topics she engaged.

As someone invested in missions (I’m on the missions team at a missionary-centered church), I appreciated the honesty and introspection. The truth is that there a lot of problems with missions. I’ve encountered missionaries who are absolutely born for the job, and a very few who are a bit too proud and self-reliant for my taste. I’ve fought with some of the older ladies at church about how we need to engage missionaries and learn from them how we can apply their tactics in our own neighborhoods, rather than listening to engaging stories and walking away feeling like we could never do that. It bothers me tremendously that there’s a portion of devout Christians who idolize missionaries or who believe “evangelizing is for missionaries.” If you are sold into the gospel, evangelizing is your job too. Period. (Please note, by evangelize, I mean share the gospel and your faith when appropriate, and LISTEN to others, engaging in their lives, and loving them. I DO NOT mean annoy your friends and shove religion down their throat.)

My family embarked on a short term mission trip in 2016, and I found many of the expectations Jamie mentioned rang true. My goal was to engage the French church and learn from them, as well as share our culture. I did not expect to convert anyone or feel good about myself; I expected to back up the work the French Christians were already doing and to grow myself. I had no delusions of being a “rescuer,” although we were heading to France, not the deep jungle. (But I like to think I would have similar expectations no matter how ‘civilized’ the country we visited might seem.) That said, the issue isn’t black and white, as Jamie writes – there are degrees, and it’s useful to reconsider what “Missions” should be. The world is changing, and missions must as well. This book is an excellent start.

If this sounds like a book you’d enjoy reading, check it out on Amazon.