#TBT Past Poetry: A Grasmere Poem 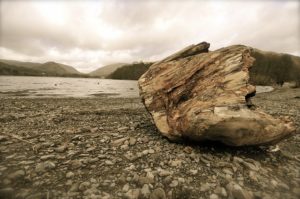 Likely Summer 2005 She rushed off stage, a fury of movements, A whirlwind of motion, juxtaposed with An Instant cessation – swift, and then still. She danced past my face then stopped with a halt, Turned and plopped down, slowly sinking deep In the couch by my side, and breathed a sigh – Calmly, quietly forgetting her part, Losing her character… Once more herself, She opened her eyes and looked at her script. Her fingers passed over words on the page And rested on the inner cover of her blue Plastic folder that contained all her lines. Under her fingertips, there was a mark – A crescent shape, with both valleys and hills. I puzzled over it for a moment, Then my eyes returned once more to her face, Which gently softened, lips fondly smiling – Her eyes looked off into a distant past, Her fingers caressed and then traced those marks And there she remained in calm, quiet peace. Suddenly she snapped to reality. Hearing her cue, she lept up quite quickly And returned to her acting, leaving the strange, Bite-shaped mark in her folder’s back cover, Acting away her brief joy of the past.
[/et_pb_text][/et_pb_column][/et_pb_row][/et_pb_section]