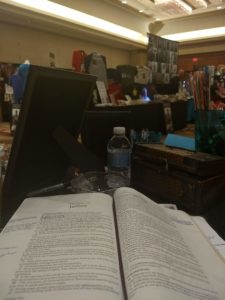 Yes, I totally read my Bible on Sunday at WhedonCon. But not for long – too many conversations!

In terms of the other panels and events, there were three main takeaways in terms of creativity (I learned a bunch more unrelated to writing, but that’s, well, unrelated.)

1) I went to a panel showing the visual effects used on Agents of Shield. They had this amazing 20 minute video breaking down the entire process the visual artists go through: from blue/green screen with the actor to removing the harness on the actor, building the terrain below, coloring it, adding buildings, adding people, adding traffic and plants, then adding clouds – all for a couple second shot of a character falling from the sky. It was amazing to see how much work went into something that looked so simple and effortless. The visual artists discussed how they outsource the work to other artists in California, knowing who to go to for specific things: one for gunshots and ricochets, one for monster skin, one for robotics, one for screens, etc. Once we got home, we watched Justice League (ugh, awful), and I couldn’t stop seeing the deconstruction of the visual effects. However, that didn’t hugely distract from the movie (except in certain scenes), but rather gave me a new appreciation for the people behind the scenes.

How this relates to writing: Good writing should appear effortless. It will take tons of efforts and edits, and you’ll need help. In the same way they outsource the bullets, you need to outsource for editors, proof readers and beta readers. You can do it on your own, but honestly, it just won’t be as good. Additionally, studying writing and reading other writers should help you learn the ins and outs. You need to be able to see behind the magic to be able to create it yourself.

2) The one panel I really wanted to see was James Marsters Q&A – not in a fangirl ‘ohmygoshhe’ssocute’ kind of way, but in a ‘he plays my favorite character in Buffy and I’m curious about his experience’ kind of way. I have to say, I didn’t think I had any opinion about James Marsters as a person before the panel, but goodness, I certainly did. If not, I wouldn’t have been so shocked to find out how incredibly intelligent he is. I don’t think I meant to, but I think I made him 2 dimensional on accident. During his panel, he discussed his favorite role (Buzz Aldrin) and the science and history of the character, his favorite architect, and how he transferred to film from stage (really interesting differences). He spoke in similes often, searching for the correct word and apt comparisons. My husband and I were lucky enough to spend time chatting with him at a dinner reception Saturday evening, and he engaged my lawyer husband in debate and serious discussion, much to the chagrin of the fangirls flocking him. I have a whole new appreciation for him as a person, not just as an actor.

How this relates to writing: With the first draft of my novel, I didn’t go much in depth with my characters. I honestly didn’t see much of a need to. I wrote what was related to the story, but left their personal lives and backstories alone. Reading Elements of Style, I realized I needed to do more character development, even if the details I imagine never show up on the page. I was treating my characters as if they were fictional, but that doesn’t make them believable. Just as this actual human I’d never met has multiple dimensions, so must my characters. I cannot reduce them to their actions alone because I am robbing them of their individuality, and thus, making them significantly less interesting. If they are meant to be believable, they better have more depth than what you see on the page.

3) The last significant lesson for me didn’t come from a panel, but from a new friend. I met him, his wife, and their adorable son on Friday, and we chatted both Saturday and Sunday for several hours. We talked about generic stuff to begin with, but by Sunday, we were discussing childhood, depression and anxiety. We were able to talk about our issues without needing to say too much because we both just understood each other. We used similar comparisons, and were relieved to see that in the deepest depression and loneliest moment of solitude, there was someone else who had experienced the same thing.

How this relates to writing: Write what you know. You might be able to learn a lot about different subjects, but there’s nothing quite like first hand experience. When you know something on a personal level, you can communicate it in a way that makes readers with similar backgrounds connect to you (or the character). If you don’t have personal experience about your topic, connect with someone who does, and mine them for information. We all seek to be understood and to feel valuable. Each character you write should have something real, relatable, and even reasonable about them (reasonable in the sense that they have a reason for their actions which they understand, even if you don’t). Value your characters in the same way you value people – as unique, individual, and important.