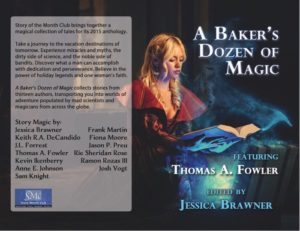 A Baker’s Dozen of Magic is an anthology of 13 stories which revolve around magic, other realms or the supernatural. I picked up this book from WhedonCon last year and finally had a chance to sit down and read it. It was an uneven read – some stories we’re fast paced and engaging, and some dragged. Overall, it was … okay.

This anthology had a few stories I absolutely loved – unfortunately it took a few stories to really get going. My three favorite stories were: North on the New Haven Line by Anne E Johnson, William Did It by Keith R.A. DeCandido, and A Soul to Save by Jessica Brawner. I’m planning on looking into the other stories from DeCandido, which are based on the same characters; I really enjoyed the world he built. These three stories in particular had creative plots combined with good characterization, and realistic dialogue. I loved these.

But there is also the flip side – not all the stories we’re stellar. To be honest, there were two stories I couldn’t even finish. That’s not to say they were awful; rather, I think they needed a few more rounds of editing and a beta read. Both suffered from stilted dialogue, information dumps, pretentious vocabulary, and a predictable story. With both, I read only a few pages before scanning to the end to see if the story played out the way I’d expected: yes, in both cases. One of the stories suffered from poor character logic (why would the characters do that other than to move the plot along), and one was just way too cheesy for me. None of these stories were total loses – they just needed a bit more work.

I had a hard time coming up with a rating, so I ended up rating each story individually, adding the totals and dividing by number of stories. This resulted in a 3.1 rating, which I feel is pretty accurate for the anthology as a whole.