As a female bladesmith Lena is barely making ends meet.

Upon learning the castle is hiring a new Master Bladesmith, she decides she cannot miss the opportunity. Can she get them to look past her gender and see her abilities?

Once she meets Zander, and he accepts her without question, hope builds within her.

When secrets are revealed and Lena learns the truth about her family’s history, she isn’t sure what will happen.

Will Lena get everything she has ever wanted, an adoring man and a position she loves, or will her life be forever changed by the truth that has been kept from her?

Megan is a full-time author and stay at home mother. She loves to read, write, and geek out on many different genres of TV and movies. She writes adult romance, young adult, new adult, fantasy, and supernatural.

Or at other digital retailers 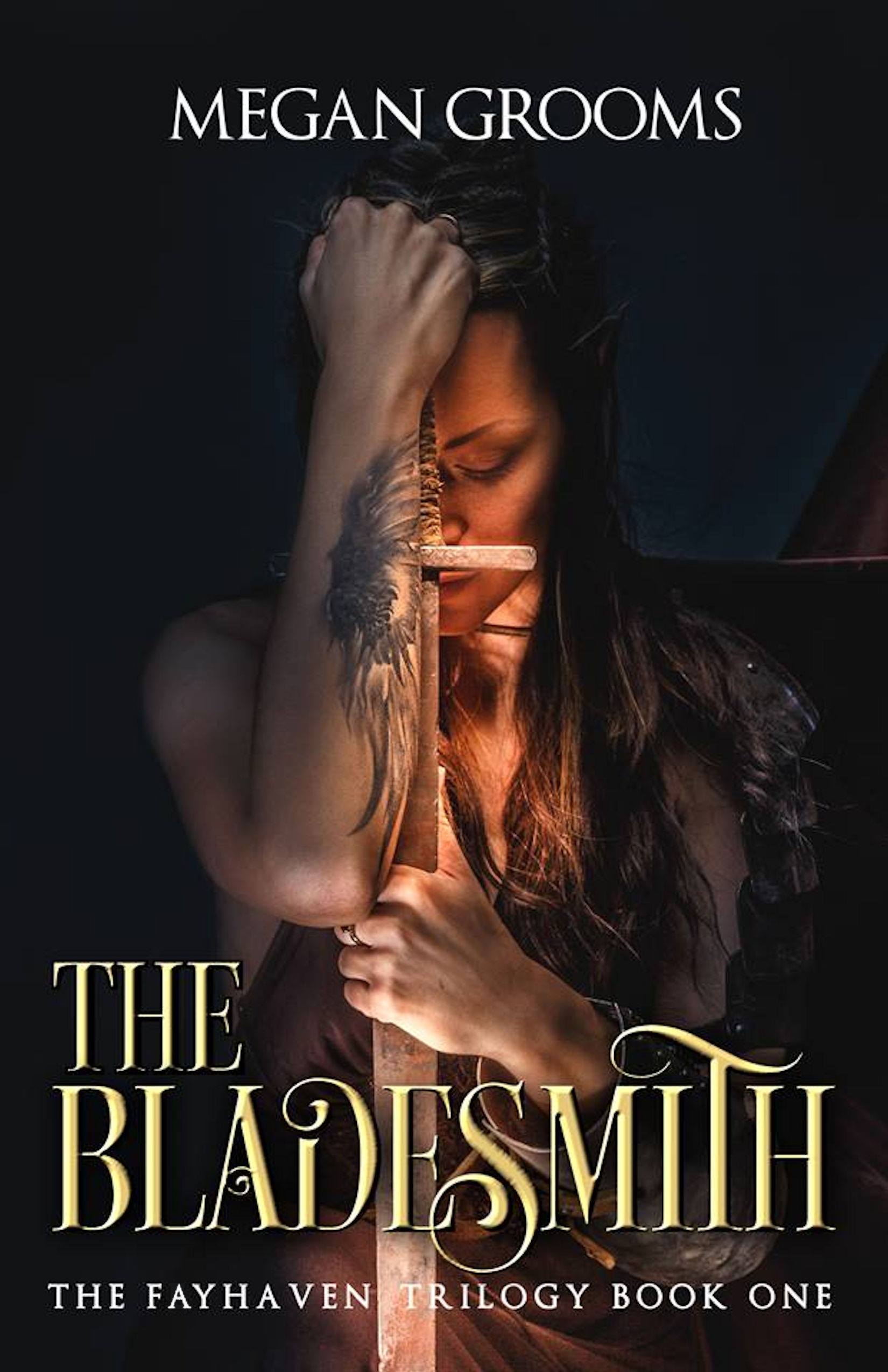 Finally, her temper got the best of her. “Sell me what I require! Why do you care who uses them, you make money and I get what I need! This is ridiculous!” She heard a thunderclap outside, as if it was putting a final point on her argument.
The man reached out quicker than she expected and wrapped her wrist in his large mitt of a hand. He dragged her to the door and flung it open. The sky outside had grown dark with ominous looking clouds. “I said I ain’t sellin’ to you! Get out! And don’t come back!” He yanked hard on her arm throwing her out the door and into the street.

Lena ran straight into something hard with a little oof. Hands circled her upper arms. “Whoa, are you alright miss?” She looked up to see the most handsome man she had ever seen. She came up only to his shoulder. His eyes were honey colored with flecks of gold, his hair was jet black and hung pushed to one side across his forehead, his skin was light chestnut, his clothes were well fitted and clean, especially compared to the clothes she usually saw around town. He smiled, but his brow crinkled a little in concern.

She stood up fully and stepped back “I apologize, I’m fine thank you.”

“It didn’t seem like it was your fault. What was that all about?” He nodded his head toward the shop door, dropping his hands from her arms.

She clicked her tongue and looked back at the shop. “I hate dealing with men.” She muttered before stopping and turning back to the man in front of her, her face growing rosy with embarrassment. “I was trying to buy supplies for my shop, but he wouldn’t sell them to me.”

She watched as he looked again at the shop and back to her “what kind of shop do you have that requires you to buy from this place?”

Lena took a deep breath, clearly this man was from out of town. Everyone knew of her in town, mostly because of who her father was, not to mention how much she stood out in looks and attitude. She held out her hand “My name is Lena, I have a shop on Carey street.” He took her hand shaking it, seemingly trying not to laugh at her. “I am a bladesmith.” She watched him, waiting for him to say something rude.

The smile fell from his face and he looked at her curiously. “That seems like a unique choice for a woman, how did you come by that trade?” Lena narrowed her eyes at him waiting still. “What is the matter?”

He chuckled “should I say something else? I’m curious how you learned.”

She looked him over again, he seemed to be a few years older than her. He was well spoken and had a gentle, but commanding voice. For some reason he wasn’t showing disdain for her chosen profession, only curiosity. “Well it’s usually polite to tell someone your name when they’ve shared theirs with you.”

Surprise flickered across his face. “My name is,” he paused as if he had to try to remember his own name “Zander.”

“It’s nice to meet you Zander. My father taught me. My mother died when I was born and he had no idea how to raise a girl, so he just did the best he could. I used to buy supplies for him here, but because he’s passed away, and everyone knows it, the store owner won’t sell to me anymore. He’s hoping I’ll sell the shop to another bladesmith. This is probably his way of forcing me to do that.” She ran her hand through her hair that hung loose behind her.

She caught him watching her. “Are you any good?” He asked after a moment.

“Yeah.” She responded right away, rather forcefully and she worried that he would find her rude, usually she didn’t care if someone found her rude. She reached behind her and pulled her dagger from its sheath. She had sewn loops into her dresses at the waist line so that she could carry one without anyone noticing it. “This is one of mine.” She held it out on the flat of her palms for him to take.

He carefully picked it up and examined it. She watched apprehensively. She hadn’t told anyone that the weapons were hers before. She was a bit nervous to get feedback from someone other than her father. He looked it over completely, testing its balance, the sharpness of the blade, seeing how straight it was, and if there were any imperfections. He took a step back from her and did a few movements and tricks with it. “This is exquisite.” He said, it was clear he was surprised, but she didn’t feel offended by that. He held it out to her and she took it back sheathing it again without trouble. “I really am quite impressed.” He said smiling fully at her. She couldn’t believe how handsome he was. “Do you have a list of supplies?” Taken aback, she looked up at him confused a moment. “I would like to purchase the supplies on your behalf. Of course, I won’t tell him that.”

She tilted her head still confused, “why would you do that for me?”

He smiled again, “because you have an incredible talent and it should not go to waste.” He held his hand out expectantly and she finally smiled and handed him the list and her money. “I’ll be right back.”

Lena looked to the sky after he was gone. The clouds seem to be disappearing the sun starting to shine through them again. She was glad she didn’t have to walk home in the rain. It didn’t take long for him to come out “how are you going to get the items back to your shop?” She pointed to the wheelbarrow by the door. He nodded and went back into the store. In moments he was back with some of her supplies. He put those in the wheelbarrow, then went back in for more. It took three trips, but he got everything. He stood before her again with that handsome smile looking down at her. “Here you are.” He handed her the list and her change. “Do you need to go anywhere else that you might have trouble? I’d be happy to come with you.”

“No, this was it.” She looked him over “I’m sorry, you’ve gotten your nice clothes all dirty.” She reached out automatically to try to brush the dirt off him. “I don’t know how to thank you enough for your help. You’ve saved my shop.” She reached behind her and untied the sheath to the straps in the dress. “Here, you may have this, to show you my gratitude.”

He took it “honestly, you don’t need to. I was happy to help.”

She smiled up at him, the first time she had really fully smiled since her father passed. “I insist, you saved me today. If you ever come back to town, please stop by my shop.”

He looked at her curiously again “how do you know I’m not from town?”

Lena’s face grew a little pink, “well, unfortunately most of the people here know me. I don’t exactly blend in…” she waved a hand around her face “and I don’t act like most of the women around here.” She indicated to her wheelbarrow of supplies. “They all knew my father, and I grew up here. Now that my father has passed away, they seem to think I should start acting like some damsel, get married, and forget about being a bladesmith. You didn’t know who I was, so I figured you were from out of town.” As she stopped talking her face grew an even darker shade of pink. “That makes me sound pretty full of myself, that I think everyone here knows me.”

Zander chuckled a little. “Not at all Lena. I think it would be hard not to know of you in a small town like this. Honestly, I’m surprised to hear you are not married already.”

She shrugged “I’m a little too strong willed for the men here I think.” He laughed, a full wonderful laugh this time, and Lena couldn’t help joining in a bit. “Well I should get home before it gets dark. Thank you again for your help today. I hope to see you again some time.”

“Would you like me to escort you home?” He glanced around a little, Lena thought he was looking for someone or for some unseen danger that she might be in.

“I will be fine, thank you. I’ve taken enough of your time today. Have a good night Zander.”

He bowed a little to her, “I am glad that we were able to meet today Miss Lena.”

Laughing a little she gave a slight curtsy, “as am I.” She was still smiling as she lifted the handles and headed toward her home. She looked back once and found him watching her. He waved and she nodded her head back to him.