New Release: Man with the Mafia by Debra J. Falasco

A man who harbors secrets shouldn’t fall for a woman who values trust above all else.

Spunky, sassy romance writer Deirdre Collins leaves her home and the roommates she adores for a fresh start in New York City. Lured by old-world charm and authentic Italian cuisine, she moves into her new apartment ready for a new life. What she wasn’t ready for was dark, brooding Italian attorney, Vincent Manetti. This stoic Adonis with a sly sense of humor and a bossy disposition is a dominating lover in the bedroom but a caring soul when Deirdre faces the constant reminders of her past. Vincent soothes her in ways no one else could. Deirdre is convinced a crazy twist of Fate brought them together. But Fate isn’t just crazy; she’s a sadistic bitch. Deidre’s past is connected to Vincent in ways neither of them could have predicted. Vincent works to keep Deirdre in the dark, but Fate plays her wicked hand, and soon, there’s nothing he can do except tell her the truth. Madly in love and suspicious, Deirdre follows her instincts, but does Vincent deserve her love and affection? Perhaps, a man who harbors secrets shouldn’t fall for a woman who values trust above all else. Is Vincent Manetti a man with the mafia, not to be trusted or believed, or is he the answer to what Deidre’s been missing her entire life? 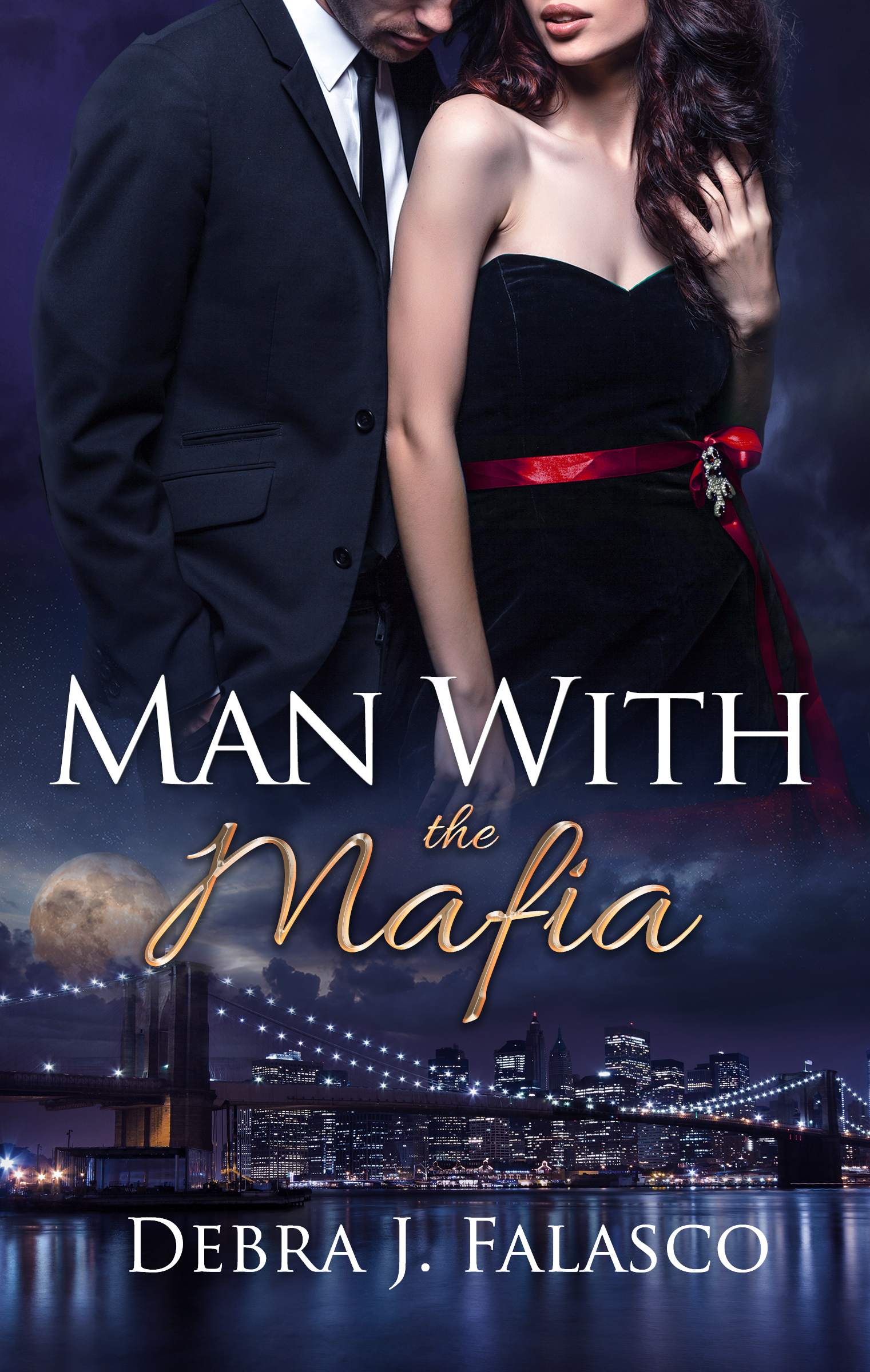 That I didn’t land on my rear end was a miracle, courtesy of the strong arm that wrapped around my waist from behind and the deep voice that said, “Easy there,” as he prevented me from falling.

I clutched the arm that held me until I got my feet under me and was able to pull myself up. My rescuer was still behind me, gallantly letting me brace myself against him. Talk about embarrassing. This lack of elegance was not how I wanted to meet people in the neighborhood.

I turned to thank the person who had kept me from biting the dust in the middle of the sidewalk. He kept his arm around my waist as I turned to face him. I wondered how long he’d leave it there because for some odd reason, it felt right. It felt good, actually. As if my embarrassment weren’t enough, I felt my cheeks heating up. How desperate for companionship was I that one touch of that masculine arm had me burning? Turning, my eyes met nothing but the collar of a stark, white dress shirt and a grey pinstriped tie.

Slowly, my gaze wandered from his collar to where the white contrasted with his darker skin. As my eyes moved, I saw that he was clean-shaven with a well-defined jaw. I was close enough to smell his aftershave. Something strong, but citrusy. Manly but elegant. I would probably be able to smell it on myself after he let me go because he held me that close. And he was still holding me. Even though I was steady on my feet now, he didn’t let go.

I took a deep breath to thank him, then ask him to remove his arm, but I froze. The eyes I looked up to, and I mean looked up to because I’m like an inch over five feet and he’s a good foot and then some taller than me, those eyes were the richest coffee brown I’d ever seen, dark and deep, and concerned and smiling at the same time.

They were also the same eyes that had watched me at Pop’s.

Absolutely humiliating. The hottest man I’ve ever seen face-to-face just saved me from falling on my butt while I was walking down the street backwards. As if his nearness hadn’t already heated my blood, I was sure I was in a full blush now. And he was still watching me. His eyes crinkled at the corners as he started to smile.

“Are you alright?” he asked.

I looked away from those eyes and nodded quickly. “Yes …I…uh…yes, I’m fine.” I didn’t elaborate. No coherent words came to mind.

I thought he would remove his arm, but it remained where it was. And I didn’t do anything to change that.

“Thank you,” I muttered, my eyes going to his collar and staying there. His stare was unnerving. His entire presence was unnerving. I thought that since we established that I was okay, he’d let go, but he didn’t even loosen his grip.

“You’re welcome.” Still, he didn’t move. I felt the heat of his eyes on me. I peeked up through my lashes.

I shifted nervously on my feet and tried to make light of the situation. “Clumsy me,” I tried to laugh it off. “I should know better than to wear such high heels.”

My savior quirked an eyebrow, but my comment got him to take his eyes off my face in order to look down at my shoes.

He grinned. “I see what you mean. But I don’t recommend going barefoot in these streets.”

I giggled. He had a sense of humor and didn’t miss my joke at my own expense.

“You’re sure you’re alright?” he asked again as he slowly, but unfortunately, loosened his hold on my waist. But he didn’t move his arm completely. The palm of his hand rested against my hip.

“I am,” I nodded. “And thank you again. But I should be apologizing. I’m sorry I almost ran into you.”

“No problem.” He jerked his head to the right. “I was just walking back to my office. I’m glad I could help.”

He smiled down at me again and my heart fluttered. My inner romance writer, as my friends and I called our consciences, hurtled herself about with glee. Get a grip, woman.

“I was on my way to the market,” I replied nervously.

Why was I telling him that? I groaned inwardly. He didn’t care. This. This was my lack of experience with men. Especially with strong, charismatic men who smelled like temptation, looked like an Italian god, and as of yet, had still not removed his hand from my waist!

And he did. His hand dropped to his side, and he took a step back. I hadn’t realized how close we still were.

“Uhm. Good. I mean, yes. Thank you!” I said, moving to step past him toward the curb. He didn’t move.

I stopped briefly and turned back to him. “Have a good day.” I took another step, but apparently had not learned my lesson.

A horn blared, and this time, both strong arms grabbed me as I almost stepped out into traffic. Instinct had me clutching his chest as he clasped me to him.

“Are you determined to hurt yourself today?” he frowned down at me. “You almost got hit by that car.”

I was beyond mortified at this point. “No. I’m just going … to the market.”

His frown didn’t change. “Maybe you should drive there. Walking doesn’t seem to be working.”

“And you haven’t even made it down one yet.”

Was he scolding me? Who did this guy think he was? I flattened my palms against his chest and lightly pushed, expecting that he would notice the pressure and release me, but he didn’t. He didn’t move a muscle. I know. I could feel how hard his chest was beneath his shirt. I bit my lip. This was an absolute nightmare already. I wouldn’t disgrace myself further by running my hands over his chest, although that was exactly what I wanted to do right now.

I tossed my hair over my shoulder and gave him my best irritated look. “You can let go of me now.”

“Are you sure?” He raised his eyebrows but started to release me. “I can walk to the market with you, if you’d like.”

I started to make a nasty retort, then I saw the warm, teasing expression in his eyes when I looked back up at him. I smiled instead. “I’ll be just fine. I promise. I’ll pay more attention now.”

His smile vanished as he stopped touching me and took a step back. “Don’t turn around this time, doll.”

He called me doll. And then he put his hands on my shoulders and turned me to face the road. “Get outta here,” he said, giving me a little push.

It was a strange way to end things, but I did as he said as I walked away. I didn’t turn around. I didn’t dare. Not because he told me not to but because a piano would probably fall on my head or something. I’d tempted fate enough for one day. Watching the signal turn, I crossed the street and didn’t look back.

About the Book one in the series: Handsome. Domineering. Passionate… Tyler Murphy is a billionaire, a man with money. This ruthless businessman has everything money can buy except the woman of his dreams. And then she walked into his hotel. Sweet. Sexy. Lonely… Vivien Lee is Tyler’s ideal woman. And she’s a romance writer. She knows all the tricks, but she’s unable to resist Tyler’s charming disposition and alpha behavior. When they meet, the chemistry is instant. For two people who never thought they’d fall in love so quickly, Tyler and Vivien find themselves unable to walk away from each other. Vivien’s lack of confidence plays havoc on their budding relationship, but Tyler’s not letting her go. When tragedy strikes, they have only each other to lean on. Will Tyler earn Vivien’s love, or is a man with money destined to be alone?

* As an Amazon Associate, I earn money  from qualifying purchases.

Or other digital retailers