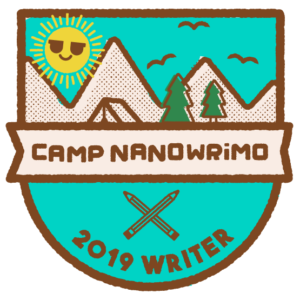 If you’ve followed me at all, you know that I love NaNoWriMo: I’ve participated five times and won (wrote 50k+ words) three times.

I’ve heard about Camp NaNoWriMo a few times, but never really looked into it. From what I had heard, it was ore for teens than for adults, so I just kind of ignored it. This past year (Nov 2018), I spent a lot of time in NaNo groups on facebook. Logically, the groups kind of died down after November, but they started picking back up again in March as people began to gear up for Camp. It was at that point that I realized that Camp is different than official NaNoWriMo in that you set your own goals for the month of April. You are also put into a cabin (of your own choosing or with people you’ve connected with) so that you can suffer with other writers.

If you read my 2019 Goals post, you’ll know that one of my major goals this year is to finish my second draft of This Book is a Disaster so that I can hopefully get it into Beta readers’ hands by June. The past three months have been difficult to find time to edit. I managed a complete read-through, along with notes, by the first week in February, but I’d barely gotten through 7 pages of rewrite by April 1.

So, a week before Camp launched, I decided to join to see if that’d be the motivation I needed to kick me into gear so that I could finish up my second draft. I set my goal at 30 hours, figuring an average on an hour a day with a one day cushion. I was randomly sorted into a “cabin;” I’d requested people with similar goals or genres, but I don’t think I match up with anyone in my group. And that’s just fine. Here’s my profile if you happen to be doing Camp, btw. 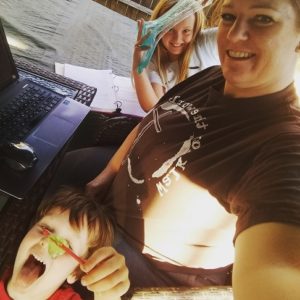 I was all set to go on April 1 when life decided to throw a whole bunch of curve balls my way, and I wasn’t actually able to sit down at the computer until yesterday – April 6. Even then, I only managed to get 20 minutes of editing in (which may have something to do with my kids playing and screaming around me (see image to the left). By the way, I went onto the Camp NaNo site to log my .33 hours, only to find I couldn’t do fractions. Instead, I had to change my goal to minutes. Do you know 30 hours = 1800 minutes? I mean, I totally did if I sat and thought about it, but I didn’t until I actually had to change the 30 hour goal to the 1800 minute goal, and suddenly that sounds really overwhelming and now I’m babbling.

Anyway, that’s my goal. I now have 1781 minutes to go. I’ve finished my warm-up blog post, and now I’m off to do some actual editing, although I’m sure something will come up and I’ll really get almost nothing done. Again. But we’ll see! Here’s hoping…