New Release: Legacy of the Iron Eagle by L. Salt

Philip Rutkowski, a son of a Polish immigrant, “enjoys” all the benefits of big city life—a boring, routine office job, the everyday long commute, a massive mortgage, and rare nights out with a few friends.

Everything changes for Philip, when his colleague and best friend, David Zilberschlag, gives him a vintage mirror to help his friend to decorate his newly-bought apartment. The mirror belonged to David’s deceased granddad, a Holocaust’s survivor, who believed that the mirror hides some dark secrets from the past.

Both friends don’t believe in old man’s “fairy tales”, but when Philip continues to see visions of a German SS-officer in the mirror who tries to talk to him, he has nothing to do, but to try to find the answers to the questions he doesn’t know.
The investigation leads the two friends to a tiny town of San Augustine del Agua, hidden deeply in the woods of Misiones Province (Argentina). There, they meet Claudia Alvarez and her friendly grandparents, the proud members of a huge German community.

Eager to find out the truth behind the mirror, lost in the woods full of evil and possessed by his visions, Philip slides deeply into madness. When Claudia does everything to help him, her own life starts to crumble, revealing secrets that her family prefers to hide, whereas David is more concerned about his own benefits.
It seems this time evil is about to win… 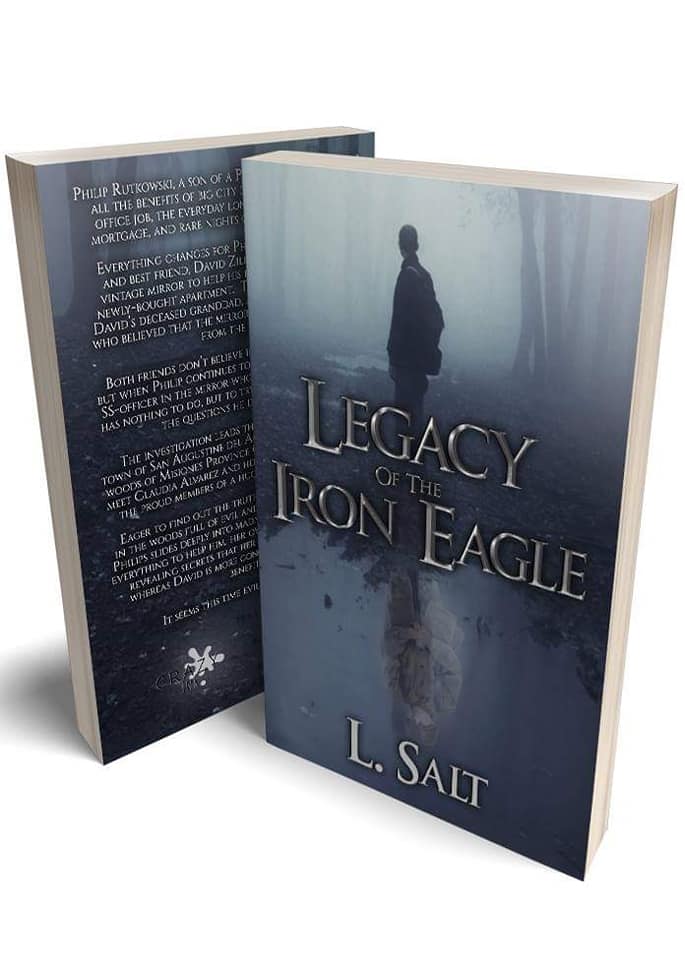 The humming sounds of falling water had surrounded him; it sounded like a lullaby. He had found himself standing on a steep, rocky cliff, staring at the dark waters without a movement. No doubt, he was in the wood, and the falling mass of water in front of him must’ve been the waterfall.

The lullaby had stopped abruptly, the sky flashed and coloured in all shades of scarlet-red. It was a tree in front of him. The more he stared at it, the more it seemed to him the tree’s mighty, thick branches had been changing their shape and finally…

His stomach had cringed with spasm. He was out of breath; his lungs were ready to explode as if the icy waters of the waterfall had filled them up. He screamed, and the next second, the giant swastika caught fire. The thirsty flames had been licking the branches, illuminating an unknown landscape.

He wanted to run, but stood rooted to the spot. It seemed to him the flaming symbol had started to swirl, pulsating and growing bigger and bigger every second.

He had screamed again, but this time, his scream echoed all around him.

The next second, everything disappeared. He had been standing in an unknown spacious room. All colours were blurry and faded, as if he had been watching an old-fashioned video—a heavy crystal candelabra hanged from the high ceiling, wooden panels on the floor and on the walls…

Oh, what is it on the floor? It looks like…stains of fresh blood…

A tall-case clock in the far corner had chimed two o’clock, interrupting his thoughts. He had turned around, when he noticed a familiar object on the opposite wall—the mirror…his mirror.

He had taken a few steps closer. The crystal candelabra, the clock, the wide beige sofa—the mirror reflected everything, everything apart from him.

He shot a glance at the mirror again, but it had changed. The glass became dark, almost black; it didn’t reflect anything at all. And then…the familiar figure dressed in the SS-uniform had appeared. Philip wasn’t afraid, but rather curious. The man’s quiet, deep voice resounded from the walls and the high ceiling, but the figure hadn’t opened his mouth. He was speaking German, but surprisingly this time, his words sounded familiar to Philip. He didn’t know the language, and yet, he knew what the man had tried to tell him.

‘Listen to the voids in the sound of humming waters.’

These words had surrounded Philip, whispering in his ears and filling up the whole space of the room. And then, they had stopped by a thud. Something had been dropped on the wooden floor.

A ring? Philip picked up the object. When he turned back to the mirror, the man had disappeared, but the glass was left smoky black.

He had turned his attention back to the ring. Its band had been covered in some mysterious symbols which looked like ancient runes; a skull with crossed bones decorated it in the middle.

‘Listen to the voids in the sound of humming waters.’ The whispers had started again, however this time, the voice belonged to a woman.

Philip had raised his head to the mirror. A slim blonde woman smiled warmly to him. Dressed in a floral long gown, the blonde lady looked unfamiliar, but Philip could swear she wasn’t a complete stranger to him. He must’ve met her many years ago, somewhere in another reality, between two worlds, in the reflections of the mirrors, in the voids of the sound of humming waters.

He hadn’t had time to finish his thoughts, when the sound of waterfall filled up the room, growing louder and louder, making him completely deaf. And then the pain which had been busting his lungs returned with vengeance.

He struggled to inhale; he was drowning in the icy dark waters of the waterfall…

‘Phil, Phil…wake up, mate, wake up! God, what’s going on?’ David’s worried face had appeared in front of him. He was lying in his bed in the guesthouse.

‘It was just a bad dream, but it felt so real,’ he mumbled absently, taking a seat.

‘Oh man, you’ve scared me,’ David continued. ‘You’ve been screaming and mumbling, and howling like mad.’

‘I’ve seen this man again. The German officer,’ Philip had started quietly. ‘This time, he gave me a ring.’

‘A ring? What ring? What exactly have you seen?’ Swallowed by another portion of mysteries, it seemed like David had already forgotten his offence.

‘The ring with a skull and crossed bones. There was some writing in it, too.’ And Philip had told him the whole nightmare from the very beginning.

‘The ring, the woman, the voids in the sound…Hm, hm…’ His friend got up from the bed and circled around the room, trying to analyse and to connect all bits and pieces of this puzzle. ‘The voids in the sound, but the sound has no voids… It makes no sense whatsoever.’ He gave up finally.

Philip leaned back on the pillows helplessly. ‘Probably, it’s just a nightmare, inspired by today’s events. Let’s try to get some sleep. We have a long day in front of us.’

He had stretched his arm, trying to find the light switch, but his fingers touched cold metal instead. He had turned to his bedside table instinctively and, the next second, covered his mouth with his palm, trying not to scream.

‘The ring…’ Philip whispered barely audible; his full lips became as white as his bed sheets. He had pointed to the metal object on his bedside table. ‘The ring from my dream.’

‘Damn!’ His friend picked up the ring carefully, as if he was afraid it might disappear. ‘Are you sure you haven’t seen it here before?’

‘I’ve never seen such a thing in my life.’ Philip jumped on his bed. ‘In fact, I’ve never been a big fan of jewellery.’

‘How on Earth does will appear here, if it doesn’t belong to us?’ Refusing to believe in poltergeist, David was close to breakdown.

‘Somebody has brought and put it here.’ Philip only shrugged.

‘Oh, please, don’t try to convince me it was the man in the mirror.’ His friend had made an impatient gesture.

‘There are only three people, besides us, who have an access to the keys for this room—our hosts,’ Philip suggested.

Then both men shot a glance at the room’s door.

‘You’ve locked the door and left the key in the keyhole,’ David had continued his friend’s reasoning, staring at the long, heavy key peeping out from the door.

‘Exactly.’ Philip nodded. ‘So the only way to get to the room is…’ His long finger pointed to a slightly opened window.

David shook his head in disagreement.

‘Ricardo is in his early eighties, for Heaven’s sake.’ He stood in front of the window, leaning his elbows on the wide wooden windowsill. ‘Can you imagine him, squeezing through this window and coming into the room soundlessly? Even I would struggle to do it, trust me.’

He turned to his friend, but Philip looked captivated by the ring. It was heavy, made from white metal, small in diameter. Its band was wreathed with oak leaves and runes.

‘It seems it was writing inside the band,’ he pronounced slowly, examining the mysterious object.

‘Maybe it was the name of its owner engraved there?’ David suggested, taking a seat next to Philip.

‘Maybe.’ He nodded. ‘We need to know what these symbols mean,’ he continued, pulling his laptop out of the suitcase and switching it on.

‘Oh, my God.’ He covered his mouth with his hand, browsing the Internet pages, then turned the laptop’s screen to his impatient friend. ‘The Totenkopfring, also known as “Death’s Head Ring”…’

‘…Was an award of Himmler’s Schutzstaffel (SS),’ David continued reading an article. His eyes widened, his jaw dropped. ‘A personal, customized gift from Himmler himself to high-ranking SS-officers?’ He frowned.

‘It looks like the one,’ Philip agreed. ‘The date of the reward and the recipient’s name should’ve been on the opposite side of the band, but they had been erased, erased on purpose. If we know the owner of the ring, we could…’

‘We could figure out why it’s given to you.’

‘To us.’ Philip frowned. The last friend’s words hit him where it hurt.

‘No, mate. This ring is connected directly to you,’ David objected. ‘I’ve volunteered to come here to help you solve this quest, but I don’t want to do anything with the Nazi’s jewellery and all this crap.’

‘Oh, so you want me to deal with this shit alone, do you?’

‘It’s your shit, not mine. The man in the mirror is talking to you, not to me.’ David only shrugged.

‘Who’s given me this mirror?’ Philip’s aggression was ready to breach the dam of his patience.

‘Of course, you’ve shit your pants and want to blame me in all your mess.’ David almost shouted it in his face. ‘You’re afraid to take any responsibility. Typical Philip—scared to death to get his hands dirty, wants to be nice and sweet to everybody. It seems like now, mate, your spotless reputation of Mr. Nice Guy is under serious threat.’

‘You’re still moody towards me for this evening, aren’t you?’ Philip snorted bitterly.

‘Oh man, whatever…’ David waved his hand, switched his bedside lamp off, and turned away from his friend.

Want to read more? Check out Legacy of the Iron Eagle on Goodreads, Amazon and other online sellers. 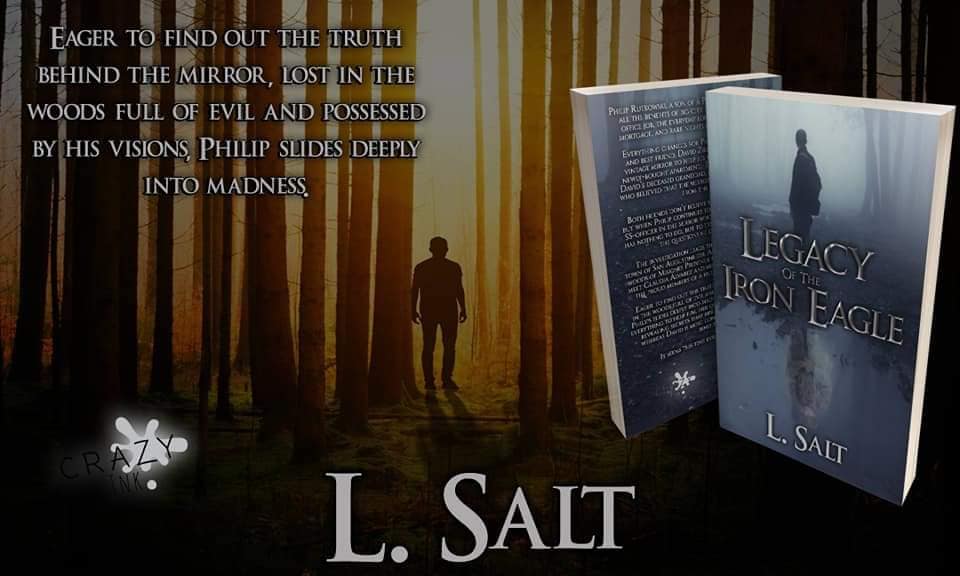