Book Review: Saga of the Dead Men Walking – Snowflakes in Summer: The Snowflakes Trilogy: Book I by Joshua E.B. Smith 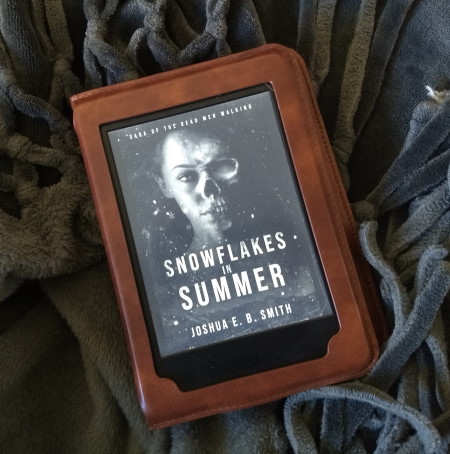 Snowflakes in Summer by Joshua E.B. Smith
My rating: 5 of 5 stars

Snowflakes in Summer is a thoroughly enjoyable and well-written story. I particularly enjoyed the dialogue. It’s clear that Joshua Smith spent a lot of time and thought in creating the political and religious system of his world, though this novel only touches on the basics, which I really appreciated. It’s clear there’s a lot more to know about the world, but as a reader, you aren’t beaten over the head with details – you after given just enough to understand. There is plenty of room to expand the world in future books.

The only negative I can comment on is that the book is missing the “so what?” – it’s an interesting story, but there doesn’t seem to be the next level of depth. The story is completely entertaining, but I don’t feel like I caught the meaning. The main character went through a whole lot but didn’t seem to grow much as a character, leaving me wanting more from his character arc. However, that’s not what everyone is looking for in a story. If you’re looking to be entertained, this book will satisfy that need.

A minor complaint is that the characters often blended into each other, but that’s likely due to me not paying enough attention to the characters’ names – there is a big cast of characters!

Warning – the book ends on a cliffhanger, so you’ll need to keep reading the series!

Overall, 4.5 stars (rounded up to five): the addition of a “so what?” or overarching theme would have put the novel up to a full 5.

Find Snowflakes in Summer on Amazon