Since getting over my depression, I remembered that I love going to the theater. My husband and I recently purchased season tickets to our local theater (Musical Theater West), and we occasionally go to bigger shows in downtown LA. I decided that I’d start to add theater reviews to my blog because although they are a totally different form of writing, they are useful as a tool for studying writing. In general, I won’t focus much on the specifics of the show other than the writing: plot, characters, themes, etc. Hope you enjoy!

The day after Valentine’s, my husband and I went to see Ragtime at the regional theater near our house. Truth be told, we only went because we have season tickets and it was included. My husband had seen it way back in high school, but I never had.
The music was mediocre and forgettable. The costumes served their propose but were nothing remarkable. I didn’t care much for the choreography, but it wasn’t a show that needed much movement. Overall, the thing was a sappy, sentimental tear-jerker … and I loved it.
I am not one for sentimentality, and I usually despise things that are written with the express propose of evoking tears, but the story moved me – mostly because of the fantastic acting. 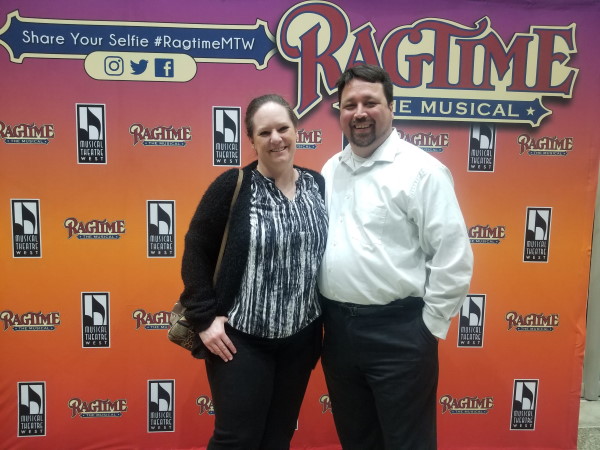 The story itself is interesting: the tale of three different families intersecting during the early 1900s, as well as the social and racial struggles that were common at the time. What brought the story to life was not the music or costumes, but rather the authenticity of the characters. They were well-constructed and believable, and they could’ve easily been real. They behaved in a logical manner according to their personalities, sometimes sending to work against themselves, which is how people actually act. They each held deep beliefs and acted on them, making the characters function on a much deeper level that musical theater characters usually do.
Of note, the racial tensions were palpable. My area is predominately white, though there are a good number of cultures and races just a bit down the road. The performance we saw probably has 75% of white people in attendance. To their credit, when the Irish fireman character uttered the “N” word, the audience gasped and fell silent. The shock of the word rippled through the crowd and set everyone on edge. Watching racism play out on stage was heartbreaking and hard to watch. It gave us white folks a better insight into what black folks and Jews had to face a hundred years ago, and sadly, still today. The words hurled across the stage to other actors could easily be heard at any protest around the US, which makes the story of Ragtime relevant and fresh, even though the show premiered in 1996.

Personally, I struggled with the nice neat finale, where everything was wrapped up and tired with a bow. It seemed a bit forced to make a point – like the characters were forced into it. However, when I stepped back and considered the perspectives of the two characters involved, I don’t know that I would’ve done anything different had I been the writer. What seemed like a forced romance was because of the cultural and social limitations of the two characters. They wouldn’t have been able to speak freely to each other, so though the romance seemed sudden, it was likely a reasonable progression given the setting and the characters participating. Highly recommended show!