Book Review: Just One Damned Thing After Another 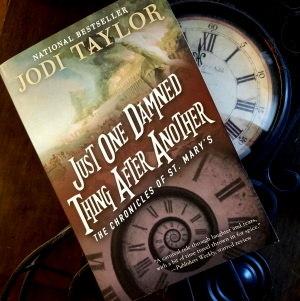 Figuring out the order of the series is a bit confusing because there are multiple short stories. Here’s a clear list of what order to read them in.

Just One Damned Thing After Another by Jodi Taylor
My rating: 4 of 5 stars

I found this book through a Facebook thread about the best humor books. The person who recommended this book also recommended books by Jasper Fforde, who is one of my favorite writers, so I knew there was a good chance that I would enjoy this book. I was not disappointed. I thought the plotting was clever and the dialogue witty. The humor was top-notch as well.

Despite the fact that I generally don’t care for first-person narratives, I loved this one and didn’t mind being in the main character’s head. Specifically, I loved the main character’s naivete in certain situations, and could certainly relate. She felt like a fully crafted human, as did most of the other characters. There were a few exceptions, but they were either bit parts or they were minor characters who were being set up for a larger role in the sequels.

The only negative for me what that the book seemed to end at about 80% of the way through. It was as though the big finale happened, then the author got really excited about the next plotline and barreled in without considering novel structure. I’m all for a denouement, but this was excessive. I don’t think I’ve ever complained about a book I like going too long, but the padded ending worked against the rest of the book. That’s not to say the final 20% was bad – it was excellent. It just belonged in the next book of the series.

I highly recommend this book to fans of Jasper Fforde or Christopher Moore, as well as people who enjoy humor books, history, or adventure.

Find Just One Damned Thing After Another on Amazon