I read A Clockwork Orange more than a year ago, but completely forgot to post a review, which is a shame because I absolutely loved it! 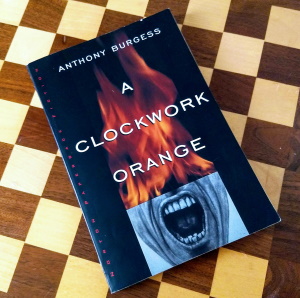 For help reading, check out the dictionary here.

A Clockwork Orange by Anthony Burgess
My rating: 5 of 5 stars

Teenager Alex goes on a spree of ultra-violence with his droogs, is caught and reformed (?).

I started this book three times before I was able to get into it. There’s a steep learning curve to figuring out the language the Alex and his droogs use. I found it tremendously helpful to look up the dictionary at the language in order to figure out the first couple pages, but one side acclimated myself to the style of speech moving forward was not that difficult. I still found myself a bit confused on certain pages, especially when the action itself was a bit unbelievable. However, I found that once I looked up the words I was unsure about, I had been accurate in my understanding of the scene.

So it took a bit of time to get into the language, I found the language barrier a phenomenal tool in immersing yourself in the world of the characters. Because you have to consciously make an effort to understand what Alex was saying, you were able to identify closer without, which made Alex’s actions even more intense. I read this novel in 2 days, which is what I would recommend. The language of the characters makes it difficult to immerse yourself in the story, so once you’re there I advise that you stay there and breathe as quickly as possible. A side effect of this looking at real life through the lens of Alex: I found myself at the post office talking about what I vidded.
Of particular interest to me, because of my faith, what’s the discussion of what makes a human human. The discussion of free will and what makes a person human was fascinating. I loved the juxtaposition of Charlie caring for Alex and his future compared to Charlie not bothering to use Alex’s name, choosing rather to refer to him as a number, made me consider how I see those around me – if I believe they are worthy of God’s grace, am I accepting them as they are, flaws and all?

Finally, of note: the final chapter differs depending on the US or UK version. There’s an extra chapter in the UK version, turning the tone and outlook more positive. The US publisher insisted on publishing without the final chapter, so the time is much darker.

Find A Clockwork Orange on Amazon